Intellectual Property is the most important topic of law for the 21st Century. It is a part of Immaterial Property Law and the world has been facing a continuous phase of “dematerializing” most of its important goods, replacing those with the technology that allows for newfound, and impactful, intangibility.

But the Law has rarely been equipped with the precise conditions to respond to the needs of the modern world, especially when it comes to the protection of innovations.

One of the first challenges that the Law has not been able to properly address regarding new technologies is time, and temporal efficiency. For example, even in places where obtaining a patent for a new creation is better than in the rest of the world, it can take almost three years, in average, for a final letter to be granted. See below (image 1): 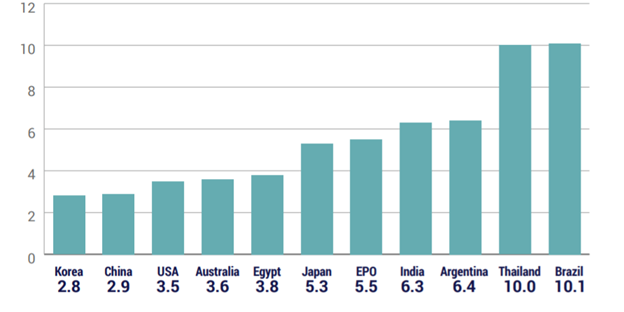 Although some of the numbers above have been improved in a few of those places (the EPO is such an example), it does not help prevent the fact that after years in waiting a patent can become irrevocably irrelevant, which can harm the very technology and investment it aimed at protecting.

The second problem is cost. Making a patent can easily cost more than 20.000 US$ and that does not guarantee the end result.

Around the world, nearly 40 Billion US$ are spent every year with patent making alone (see https://www.iam-media.com/patents/cipher-report-portfolio-optimisation). That amount does not take into account the actual fees that are paid to the Patent and Trademark Offices.

Processes that allow for less paper and fewer burocratic steps have been brought up by the immaterial technologies mentioned above, helping the situation to some extent. And all that “dematerializing’ movement is driven by innovation.

But so much more could be done in order to allow Law and Technology to easily interact with one another to help Innovation thrive.

That’s why the NeoPTO Alliance was formed. This initiative, that runs in tandem with NeoPTO’s Company, is done by putting together the best actors in both the Innovation and Legal fields. It should then be possible to overcome the problems of the lack of agile Law tools for the ever evolving new technologies and their impacts on everyone’s lives and be able to make Innovation work in favor of the Law, thus benefiting both.